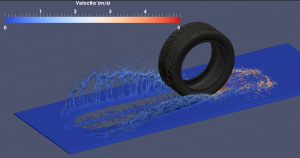 Besides the already large need of simulating continuum phenomena (CFD, DEM, …), requests for simulating phenomena belonging to the discrete domain are quickly growing up, mainly for the granular mechanics and/or its interaction with continuum fields like fluids. DEM (Discrete Element Method) is the technique devoted to this aim: every single particle, even with shapes and properties different one from each others, are tracked alongside their dynamic behaviour in time. Newton’s second law and Euler law are integrated in time in order to compute forces and moments acting on solid particles and thus infering their velocity vectors. Standard numerical techniques are scaling well among several parallel CPUs, but industrial applications would need hundreds of CPUs for studying complex systems made by several millions of particles in order to meet the time constraints of the Customers. GPU technology solves this kind of problems. DOFWARE takes advantage of this technique, reducing the computational time by some orders of magnitude.

Among the main codes DOFWARE is using for performing DEM simulations we cite LIGGGHTS®, an open-source tool based on the well known LAMMPS code, applied to molecular dynamic simulations. LIGGGHTS®  is  used both as standalone code and coupled with OpenFOAM® (CFDEM®project): the interaction between solid particles and fluid domains is studied by providing a 2-way coupling between them.

A qualitatively similar approach is used by SPH (Smoothed Particle Hydrodynamics), in the sense that both solve the dynamics of discrete particles. However the aims and the physical approach are completely different. It is a so-called CFD meshless technique since it allows to reproduce fluid dynamic fields behaviour without adopting static Eulerian meshes as the standard FVM. Navier-Stokes equations are discretized and solved over several discrete points which moves following the flow fields (Lagrangian point of view).

SPH is growing up very quickly in the last years: its appeal is outdoing that of standard CFD, mainly for what concerns multiphase flows where a sharp interface separate different kinds of fluids (e.g. wave phenomena, hydrodynamics, hydraulics, aquaplaning). The
main advantages of SPH concern the simulation effort:

DOFWARE is involved in the usage of SPH mainly for multiphase flows analysis: open-source codes are used, which allow to customize computational tools based on the Customer needs.

We use cookies to make sure you can have the best experience on our website. If you continue to use this site we assume that you will be ok with it.Ok